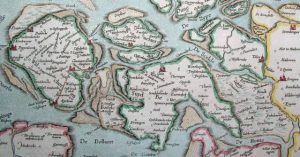 15th July 1809 the 2/84th (846 men) marched from Colchester to Harwich for embarkation to the Scheldt. A Depot company was maintained at Harwich with a detachment at Bury St Edmonds.

At dawn on Friday 28th July 1809, the expedition set sail from the Downs…..Never will I forget the glorious sight of the most powerful and numerous fleet which ever left the British Shores. The sea looked as if groaned under the weight of so many vessels, and, as far as the eyes could reach a wilderness of masts were seen….

That evening scores of ships anchored a few miles off the North West coast of Walcheren. The remaining vessels left the Downs over the next few days.

The following day, the weather changed becoming cloudy and windy later changing to rain and gales preventing any landing, owing to high seas.

However on the north side of Walcheren attempts were made to land troops….The Gunboats had taken up their position along the shore, the flats (shallow-draught landing craft) full of soldiers and towed by the ship’s boats, formed in the rear of the Gunboats….All now was solemn silence saving the Gunboats, who were thundering showers of iron on the enemy…….Their well directed fire soon drove them to shelter behind the sandbank…….the troops leaped out and waded ashore, drove the enemy from behind the hills, where they had taken shelter from the Gunboats

Many villages and the town of Middleburg surrendered that day

31st July, the fortified town of Veere on the North East coast off the island was surrounded by troops. At 11am, the Bomb vessels and Gunboats began a sustained attack with 10” and 13” mortars. In the evening incendiary rockets were fired into the town, which terrified the occupiers so much that they surrendered.

On the 3rd August Ramakin surrendered before the British fired a shot. The only place remaining on Walcheren to be captured was Flushing.

Another British Army Division had been transported further up East Scheldt so the troops could land onSouth Beveland to the East of Walcheren. Bad weather delayed the disembarkation and, when 6,000 troops eventually landed, they found the Dutch had already abandoned the key positions. Including Fort Batzon on the S.E. corner, which commanded the confluence of the East and West Scheldt.

However to reach Antwerp they needed control of West Scheldt, and the towns of Flushing and Cadsand

Within a week of landing a on South Beveland some of the troops began to fall ill……I beheld whole parties of our riflemen in the street shaking with a sort of ague, to such a degree the could hardly walk, strong and fine young men who had been but a short time in the service seemed suddenly reduced in strength to Infants, unable to stand upright……..(Rifleman Harris)

7th August an effective blockade of Flushing was now in force by sea and land.

…. In the middle of the conflict, it became so hot that I threw off my uniform and neck cloth and undid my shirt collar….I have been scarcely able to use my right hand since, the skin having been taken off four of my fingers, by the friction of the ropes I was working the guns; for I pulled and hauled as well as my men ……….(Marine Lieutenant Robert Fernyhough, in the frigate Statira.)

On the same day Monnet, flooded more of the surrounding area by breaching the dykes. He was asked to surrender the town and that the women and children be sent from the town. Monnet refused. There was a fear that the breached sea defences would flood some of the gun batteries.

At 1.30pm on Sunday 13th August, the bombardment of Flushing commenced from the land gun batteries and a flotilla of gunboats situated above and below the town.

….I was stunned and bewildered by the noise; the bursting of bombs and falling of chimneys, all adding to the incessant roar of the artillery. The smoke of the burning houses and guns, formed altogether, a scene not to be remembered but with horror…….Thomas Howell 71st (Highlanders) Foot

14th August, 7 Battleships under Rear-Admiral Stachan (on board St Domingo) moved towards Flushing to increase the bombardment. However the St Domingo and Blake sailed too close to the shore and became grounded within pistol shot distance of the defenders; for 3½ hours they remained stuck until the tide rose and freed them, during this time, they were continually under fire from the defenders.

At 4pm the bombardment ceased, to allow the French to accept surrender, which they refused and so after 3 hours the bombardment continued… This night I was on picquet…. one half of Flushing was in flames, the fleet and the whole of the battery’s were at it pel mel……I often counted fifteen shells and twelve rockets at one time hovering and descending in to the devoted town ….(Private Wheeler.)

15th August the town surrendered early in the morning, the bombardment had continued for 34 hours, apart from an interval of 3 hours

The destruction of Flushing was terrible, as were the civilian casualties, French soldiers had shot women who had requested Monnet to surrender earlier. Nearly 4,000 troops and inhabitants had been slain.

20th August the first man in the battalion to die was Private Charles Barnes/Baines, who died at Middleburg Hospital – He is shown on the Muster February 1808, described age 25; 5’2; a weaver from Wigan, Lancashire

In September 1809 John Webbe an Inspector of Hospitals wrote – The bottom of every canal that has direct communications with the sea is thickly covered with an ooze, which, when the tide is out emits a most offensive effluvia. Each ditch is filled with water which is loaded with animal and vegetable substances in a state of putrification and the whole island is so flat and near the sea, that a large proportion of it is little more than swamp and there is scarcely a place where water of tolerably good quality can be procured. The effect of all these causes of disease is strongly marked in the inhabitants, the greater part of whom are pale and listless.

The Fever – Comes with a cold shivering so great that the patient feels no benefit from the clothes piled upon him in bed, but continues to shiver still, as if enclosed in ice, the teeth chattering and cheeks blanched. This lasts some time and is followed by the opposite extremes of heat, so that the pulse rises to 100 in a small space. The face is then flushed and the eyes dilated, but with little thirst. It subsides, and then is succeeded by another paroxysm and so on until the patient’s strength is so reduced and he sinks into the arms of death…

4th September, the last soldiers were withdrawn from South Beveland and, the last British ships descended theScheldt. The sick troops were being moved to England as the conditions on Walcheren were terrible. However the coastal towns had difficulty coping with the vast number of sick soldiers

16th September 1809, the first sick of the Battalion who had been treated at Vere General Hospital embarked for England

Hospitals were set up in houses, churches and warehouses and the conditions were appalling. Men were packed together in hovels as would be unfit for dogs, exposed to the noxious night air and in some cases sleeping on damp straw.

When General Dyott (2nd in Command) inspected the barracks at Flushing, he found 12 ill solders in one room with only two blankets between them. The sick died almost by the minute and all burials were ordered to be by night without candles or torches. Even the fortunate who were evacuated to England were left lying on the beaches in their own filth.

9th December 1809 the 2/84th drastically reduced embarked at Flushing, Their strength being 14 Officers and 200 men, they remained on board ship for 14 days