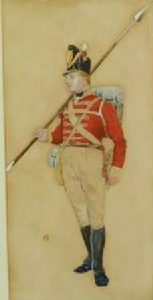 Travelled with the Battalion on the Scheldt Expedition and on 11th September 1809 in Vere General Hospital, Walcheren until 10th – 24th October 1809 when he was sent to the 2/84th Depot at Bury St Edmonds, – Prize Money 18/6¾d

The Girl I left Behind Me – ://www.emp3z.today/en/download/oblF9EqE9RA/The-Girl-I-Left-Behind-Me.html

In his absence and at his request he was discharged at Cambridge Barracks, Portsmouth on 13th January 1832, testimonial as to his service was given to the board by Quartermaster Serjeant Brown and Colour Serjeant Daly

1861 he was living with his wife at Mount Falinge Lodge, Rochdale