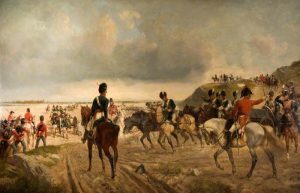 Wellington had 64,000 Anglo-Portuguese infantry and artillery, plus 25,000 Spaniards. Since cavalry was useless in the mountains, the British commander sent his horse regiments to the rear.

In order to gain his bridgehead, Wellington had to force a crossing of the Bidassoa estuary. The river was 1,000 yards (910 m) wide and 20 feet (6.1 m) deep at the high water mark below the Île de la Conference. What the French never suspected was that, at certain low tides, there was only four feet of water over the lower fords. Allied intelligence knew that the next low tide was 7th October 1813.

The crossing was meticulously planned. Near the lower fords, British engineers built a turf wall near the river. This would shelter Andrew Hay’s 5th Division during the time before it crossed the river. Wellington positioned five field batteries and three 18 lb (8.2 kg) siege cannon to provide fire support.

On the extreme right of the French position a line of eight redoubts stretching from Mount Aya to the sea beyond Fuenterrabia had been occupied since the battle of San Marcial by Freire’s Spaniard’s, Lord Aylmer’s brigade ( 76th 2/84th & 85th Foot Regiments), and the 1st Divison and behind them were seceretly assembled the 5th Division.

The plan was for the 1st Division to move overnight to Irun and place themselves under cover of  a long low ridge below the heights of St Marcial and then make for the three fords at Behobie, Nasas de Arriba and Nasa de Abaxo; when across the river to storm the hill known as Montagne de Louis X1V.

6th October 1813 – After a day of intense heat a thunderstorm started during the evening and overnight towards the summit of Péna de Haya and moved slowly over the Bidossoa, the greatest rain falling over the French positions.

During this Wellington secretly moved a number of guns and howitzers along the crest of San Marcial, whilst the columns attained their positions alongside the river Irun; opposite Andaya.

The 5th division were moved to the vicinity of Irun together with the guns and pontoons opposite Andaya, whilst Sprye’s Portuguese and Lord Aylmer’s Brigades were posted in the ditch opposite Fuenterabia

7th October 1813 – Passage of the Bidassoa – By 3am. the allies were under arms; and with the storm raging over the French, they were unable to see the Allied troop movements. All the allied tents were left standing and in the morning, the enemy could not see any change and therefore not suspicious of anything untoward.

At 7am the 5th Division and Lord Aylmer’s brigade emerging from their concealment took the sands in two columns; the left column facing the French camp of Sans Culottes, the right facing the ridge of Andaya.

When they were midway an English rocket was sent up from the Fuenterabia as a signal.

Then the artillery opened fire from San Marcial. The French completely surprised permitted the 5th Division brigades to gain the right bank and form their lines before firing.

From the crest of San Marcial seven columns could now be seen at once, moving on a line of five miles, those above the bridge plunging at once into the fiery contest, those below appearing in the distance like huge sullen snakes winding over the heavy sands (Napier Vol. 5 page 312)

“A general panic seemed to have seized the enemy. Instead of charging us, as we moved forward in column, they fired their pieces, and fled without pausing to reload them; nor was anything like a determined stand attempted, till all their works had fallen into our hands, and much of their artillery was taken. It was one of the most perfect, and yet extraordinary, surprises which I ever beheld.” (Gleig ‘The Subaltern’ page 79)

Rapidly, the British overran the Croix des Bouquets position and the Spanish captured Mont Calvaire. The entire ridge on the French side of the river fell into Anglo-Allied hands at the cost of only 400 casualties.

Gleig a Subaltern in the 85th Foot, In Lord Aylmer’s Brigade with the 76th and 2/84th Foot writes; about an hour before dawn the Brigade being about 1500 strong marched to a hollow close to the Bidassoa, where they laid down until the three 18 pounder cannons opened fire. From where they moved forward in columns crossing the Bidassoa to the heights of Andaye; apart from one stand very little opposition was met, the French discharging their weapons before throwing them down and running away and the Heights being taken

Oman Vol.7 page 124 made singular reference to  Lord Aylmer’s Brigade waiting above Irun as reserve to the 1st Division