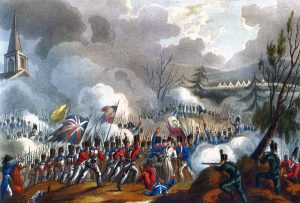 Meanwhile, the remainder of the British force under Hope (1st, 5th and Light Divisions, Thomas Bradford and Alexander Campbell’s independent Portuguese brigades, Lord Aylmer’s British brigade and one brigade of the 7th Division 24,000 men) launched diversionary attacks towards Bayonne on the west bank of the Nive.

At 7am the first and fifth divisions, forming together the left wing of the army under Sir John Hope, advanced by the great road leading from St. Jean de Luz towards Bayonne to reconnoitre the enemy’s entrenched camp opposite the village of Anglet; and to examine the course of the Adour, from the flank of the entrenched camp, resting on that river opposite the old convent of St. Bernard, to the sea.

The fifth division were west of the Chaussee, between the Lake of Mouriscot and the sea

The French outposts retired fighting and Hope sweeping on a half circle to his right and being preceded by the fire of his guns and any skirmishers, arrived in front of the entrenched camp at about 1 o’clock. His left rested on the Adour, his centre menaced a strong advanced work on the ridge of Beyris beyond Anglet; his right was in communication with Alten, who with a shorter distance to move had halted above Bussussary and Arcangues until Hope’s fiery crescent closed on the French camp, then he advanced. But with the exception of a slight skirmish at the fortified house, there was no resistance.

Robinson’s Light Company was pushed up hard against the French defensive perimeter as far forward as Angelet, where the village is won and held after intensive fighting – 2/84th 6 men killed; 40 wounded

When evening closed the allies fell back towards their original position under heavy rain and extremely fatigued. The royal road was knee-deep of mud and his troops were twenty four hours under arms, the whole days fighting cost about 800 men for each side the loss of the allies being rather greater on the left bank of the river than the right.

The 1st Division and Lord Aylmer’s Brigade, returned as directed to St Jean de Luz 10 miles away; with Hope, whilst the 5th Division being three miles away and Bradford’s Portuguese supporting the pickets who occupied the plateau of Barrouillet and Bidart, won during the day

During the evening D’Erlon under cover of heavy rain moved 50,000 from Bayonne ready for an attack the following day

10th December 1813 1st Combat of Barrouillet – Shortly after dawn on a gloomy misty morning, Soult was to launch a counter-attack with eight divisions against Hope driving them back from Anglet to Barouillet. However due to his troops having been wrongly positioned in the dark, it was 9am before he was able to give orders

Robinson’s brigade including 2/84th foot were the picket facing the Chausee between Etang de Brindos and Etang de Mouriscot supported by Campbell’s Portuguese.

Robinson’s Picket was taken completely by surprise when the French attacked at 9.30am, it broke straight through  the centre of the line and all the flanking pickets had to run hard in order to reach their supports a mile behind. Many were cut off and captured before they could reach safety, including 2 Officers and several men from the 2/84th

An officer of the Cacadores standing in front of the Barrouillet described it :- “A wild scramble, only an hour after the first shot had been heard on the far right a perfect rabbble, composed of men of many Regiments, Portuguese and English, came pouring down the high road, their officers storming at them and trying to get them to face about.”

The village was well adapted to defend, the front being covered by thick coppice, with a house known as the Mayor’s house east of the road and separated from it by a field and an orchard.

The Portuguese took position in the coppice, whilst the Line Regiments formed between the Lake of Mouriscot and the road, where the French attack was held.

Hope directed the Pickets in person and resisted the enemy until Campbell’s Portuguese and then Robinson’s Brigade arrived from Bidart. The hour following was the most dangerous, with much confused wood fighting as both sides kept extending their lines eastwards into the bush.

Due to the woods and hedges breaking up the French attack, it developed into combat between small groups. The assailants cutting ways in the hedges poured through in smaller or larger bodies as the openings allowed, and were immediately engaged with the defenders; at some points they were successful at others beaten back, and few knew what was going on to the right or left of where they stood.

While this sanguinary encounter was enduring, on the front of the gallant 5th, Clausel’s column having penetrated the valley that intervened between the positions of the 5th and Light Divisions, made a furious attack on the right flank of the 5th. This brave Division although attacked in front and flank, resolutely maintained its ground for two hours ….. (The Life and Times of the Late Duke of Wellington by Lieutenant-Colonel Williams page 105)

At noon the French launched an attack at Barrouillet from the north and east front.

The enemy however at one period of the battle, forced their way through a wood and entered on the right of Barouillet, in so strong a force, as to overpower a body of its brave defenders. (Williams as above)

The fighting was most severe and Robinson’s Brigade in the Chateau was in great danger of being surrounded as the line to the right of it had given way. ‘

A third and more vigorous attack was made round the outbuildings and in the coppice in front of the Mayor’s house, when Robinson’s Brigade was again heavily attacked.

A squadron of French Cavalry suddenly cut down some of Campbell’s Portuguese near the wood, and on the right the Colonel of the 2nd/84th Lt. Col. R. Lloyd having rashly entered a hollow road where the French possessed the high banks was killed with a great number of men’ –

They resisted the French attack for two hours before the 1st Division and Lord Aylmer brigade reserve arrived.

The relieving force had been pounding along the muddy Chausee (Royal Road) for four hours past long strings of wounded men of the 5th Division, who were urging them “Push on – or it’s all over, there are only 2,000 of us left down there.”

The merest handful of British troops were opposing themselves in a most determined manner, to a mass of men so dense and so extended as to cover  the whole of the main road as far as the eye could reach. Our people were, it is true giving way. They had already maintained an unequal contest upwards of two hours; and their numbers originally small were fast diminishing. But no sooner had the head of our column shown itself, than their confidence returned, and they renewed the struggle with increased alacrity. (Gleig page 128)

The French were already mostly exhausted and when they saw the head of the column coming from the Bidart Road, confidence visibly disappeared

Grenville’s brigade which had been kept in reserve relieved Robinson’s brigade (2/84th) who had lost many men. Robinson was wounded and Brigade command was devolved to Major Tonson (2/84th). Captain Jenkin then commanded the 2/84th.

The 2/84th had fought until they ran out of ammunition.

The 5th had suffered severely; for when the action began, the ammunition mules were absent; and when the pickets were forced back, they had scarcely a round remaining…. (Williams as above)

Robinson Brigade was then shifted to second line towards the right

Sometime after 3pm the action dwindled to skirmishes in the woods.

Hope’s Light Division, 5th Division and two unattached Portuguese Brigades had held off a French attack almost triple their force throughout the morning.

Lieutenant-Colonel R. Lloyd who founded the 2nd Battalion was killed age 37 by a musket ball to the chest. He was buried standing upright in the little Basque church of Bidart near Bayonne. The inscription in French on his grave reads ‘Admired and respected by his grateful Country. Honoured and esteemed by his officers and soldiers. Beloved, and regretted by his numerous friends.

11th December 1813 2nd Combat of Barrouillet – The men worn out from the previous day were very much off duty, many gathering wood for their campfires, others further afield in fatigue parties. This, being in spite of the fact that the outposts had reported the French; cutting outlets in the hedges and, troops amassing behind the pickets.

At 2pm the French attacked along the whole line of Hope’s outposts from Chaussee eastwards, including the high grounds in the woods. As in the previous day, the supports of the pickets were caught unprepared and none of the Brigades was ready to get under arms.

A sudden swarm of Tirailleurs burst from the French lines with formed battalions behind them and attacked Hope’s pickets on the open ground along the Chausee and the woods to the eastern side.

For a second time, there was a stampede of fleeing soldiers down the road to Barroullliet and a hasty turning out of men to form up across the fields.

The French took possession of the outbuilding of the Mayor’s house and occupied the coppice.

Several of the British Regiments in the 5th Division were broken up before a line of resistance consisting of the 5th Division, part of Aylmer’s Brigade and the Portuguese was formed between the Lake of Mouriscot and a front extending across the wood and orchard in front of the Mayors house and the valley of Ouhabia

After the fighting the 5th Division was replaced with the 1st Division. And the 2/84th finished their fighting in the Peninsula. Hope had allowed himself to be surprised twice by bad disposition of his outposts, this lack of caution being the explanation as to the large loss of prisoners. He also kept his support so far from the fighting line, that there was serious danger of Barouillet being lost before they could arrive