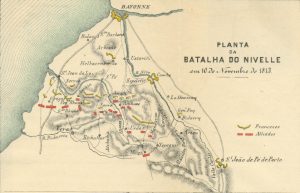 Wellington’s plan was to distribute troops along the whole of Soult’s line but make his main attack in the centre. Any breakthrough in the centre of the French left flank would enable the British to cut off the French right Flank. So, Wellington ordered that the British left (attacking the French right) would be led by Sir John Hope commanding the 1st and 5th Divisions as well as Freire’s Spaniards, Vandeleur’s Light Cavalry and heavy German Cavalry (Total 19,000 men and 54 guns.)

The onset began at 6 a.m. as the dawn broke, the British guns opened fire in rapid succession and the Infantry charged at the French with the nine divisions fanning out over a five mile front.

The 5th Division led by Hope made a false attack against five French Battalions..

The rapid deployment and attack by Hope totally engaged four Divisions of French infantry allowing Wellington to concentrate his main attack on the centre, which commenced at 7 am.

On our part, we had no time for firing, but rushed on to the charge; whilst the nine-pounders, already alluded to, cleared the barricade with grape and canister. In two minutes we had reached its base; in an instant more we were on the top of it; when the enemy, panic-struck at the celerity of our movements, abandoned their defences and fled. We followed them through the street of the place, as far as its extremity, but, having been previously commanded to proceed no farther, we halted here, and they escaped to the high grounds beyond.(Gleig page 95)

Having taken the camp at Sans Cullottes in the morning, when the redoubt at Urrunge was carried, the 2/84th was ordered to take a strong position occupied by the enemy on his extreme right. This was carried by the 1st (light) company of the battalion (2 men both 1st Company were killed; Private George Nelson & John Wilson (1) together with 5 wounded) – Only four officers were present at Nivelle; Captain Jenkin; Captain Arthur Bernard; Captain William Piggott; Lieutenant Samuel Basden (as per Challis)

This was carried out in a gallant manner by the Light Company, chasing the enemy up a glacis to a fortified block house…..(H.C. Whylly Vol, 2 History of the York & Lancaster Regiment)

The French resistance melted away and soon they were in full retreat (by 2 o’clock they were streaming across the Nivelle) having lost 4351 men to Wellington’s 2450.

Fortescue A History of the British Army  Vol. 9 (page 525) Shows the  2/84th Battalion as being transferred to Robinson’s Brigade on the 17th October 1813; this would be at odds with their being present in Lord Aylmers Brigade at the Nivelle, as described by:-