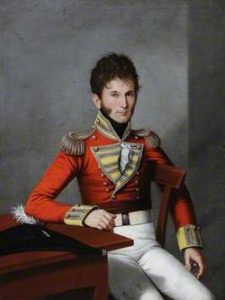 14th March 1794 Lieutenant – the 66th Foot were transferred from Gibraltar to St Domingo, West Indies, the island having been taken from the French Republicans was in a state of complete anarchy. Between February 1796 and February 1797, 15 officers and 690 n.c.o’s and men of the 66th Foot died on the island.

On the 2nd October 1800 he was appointed Captain in Fraser’s Corps of Infantry in Africa and left for Africa 16th October that year. Emigrating  to live in St Mary Bathurst,  Africa (now Banjul, Gambia) where his brother Edward was already living, he there married a Creole and had two children

He arrived 1st January 1801, immediately joined Fraser’s Corps tried and failed to seize Senegal, then proceeded to the Island of Goree

June 1801 Captain Lloyd led a volunteer detachment in a successful attack against a Spanish ship (30 guns) without losing a man.

December 1801, he was sent with a detachment of men to the British fortress in Sierra Leone after an attack by natives.

February 1804 a small French force attacked and captured Goree; Lloyd was wounded in the action and a prisoner of war

9th March 1804 the French capitulated at Goree to H.M.S. Inconstant

January 1805 Major Lloyd was ordered to raise 35 volunteers from the Corps to escort Mungo Parke’s Expedition to the interior of Africa – He offered them double pay and freedom should they obtain a certificate of satisfactory conduct; the Corps being comprised mainly of deserters and those from the prison hulks, it was hardly surprising that he had a large response for volunteers. Parke’s in a letter dated 10th November 1805 stated out of the original 44 Europeans who left Gambia in good health only Lieutenant Martin and three soldiers Abraham Bolton, John Connor, Thomas Higgins all of the Royal African Corps and himself were left alive, the others having all perished from fever

Lieutenant- Colonel Lloyd commanded the Battalion through the ‘Expedition to the Scheldt’, through it’s time in Ireland and on to the Peninsula campaign.

He commanded at the Nivelle and Nive, where on the 10th December 1813 he was killed in action

The fighting was most severe and Robinson’s Brigade in the Chateau was in great danger of being surrounded as the line to the right of it had given way. ‘ A squadron of French Cavalry suddenly cut down some of Campbell’s Portuguese near the wood, and on the right the Colonel of the 2nd/84th Lt. Col. R. Lloyd having rashly entered a hollow road where the French possessed the high banks was killed with a great number of men’

Lieutenant-Colonel Lloyd was killed by a single musket ball to his chest and was buried at Bidart, the inscription on his tombstone in French reads 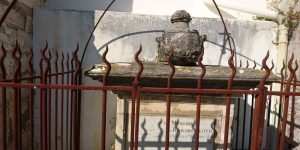 Upon his death the Battalion allegedly had a black thread in their gold lace in undying memory of their late Lieutenant- Colonel.

This seems to be at odds with the suggestion that he was  buried upright in his grave; being a well-known practice at the time when those responsible hoped the deceased would get no rest even in death.

Limerick – December 13th – Saturday last the 84th Regiment marched to the Cathedral in funeral procession, and heard Divine Service, being the Anniversary of the death of their late Commanding Officer, Lieutenant-Colonel Rickard Lloyd,

“As the body of Col. Lloyd was consigned to the grave during the continuance of a severe action, the regiment had no opportunity of interring him with military honours; they have, therefore chosen the anniversary of his fall as the most proper time to gratify their own feelings, by paying this last tribute of affection to him, who they loved as a friend and esteemed as a soldier.

The humblest individual finds a mourner for his loss; but the funeral cry of the warrior, who has expired in supporting his Country’s cause, is swelled by the tears of a nation.

The heartfelt grief displayed by the regiment on this occasion, and the handsome monument erected by them; whilst they afforded the greatest consolation to the family, hold forth one inducement more for the proud daring of a soldier, by convincing him, that if death should arrest him in the career of glory, the memory of his virtues and his valour will be upheld to the world by those who witnessed and could best appreciate them”

The following is the inscription on the monument:-

To the memory of

While engaged in a Successful Contest against

Near the City of Bayonne, in the South of France,

This monument is erected

By the Officers, Non Commissioned Officers,

Of the Second Battalion 84th Regiment of Infantry,

As a testimony of Respect for his Valour

And of Affection for his Virtues

During his command in Ireland (1810-12) the Battalion had a bad record for deaths and desertions;