Although McCrae was not with the battalion in the Peninsula Campaign, he is worthy of mention as he played an important role during the travels to New South Wales and New Zealand in 1819 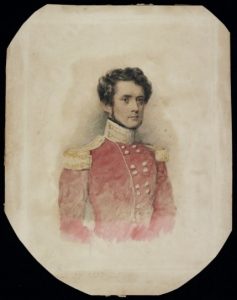 Born in Edinburgh 25th January 1799 the eldest child of William Gordon McCrae, (advocate). His father had returned to Scotland refusing to benefit from the slave trade and plantation of his father in the West Indies

Alexander McCrea was appointed ensign 9th September 1812 to the Chassuer’s Britanniques –Originally formed from French Royalists, they arrived in Portugal Spring 1811, and it consisted  entirely of deserters from the prison camps, mainly French, Italians, Poles Slavs and Swiss. The majority of French were mauvais sujet, (mercenaries) who had been a curse whilst serving in their French Regiments. The officers were predominantly second generation emigres (French Royalists) who thought of the war as a family feud against Napoleon to avenge the death of Louis XVI and Massacres of Quiberon. They kept the troops under iron-discipline and used the lash freely; however they failed to stop desertion and misconduct among their criminal classes. The Regiment had a habit of fading away when facing the French and Wellington had a standing order that they were never to be trusted with out-post duties. They remained until the end when it was disbanded.

Whilst McCrae served with the regiment they were later entitled to Military General Service Medal with clasps Vittoria, Pyrenees, Nivelle, Nive, Orthes. McCrae made no application for the medal

I have just done an extraordinary thing – I have volunteered a married officers duty to escort convicts to New South Wales – The application for my being allowed to take the duty has gone to Horse Guard for approval which will no doubt be granted – I expect the answer by tomorrows post If it is granted we shall be off in about a fortnight. The vessel is fitting out at Deptford she is a Government Store Ship and is to bring back a cargo of timber from Prince Edward Island – We return with her – I suppose we shall be absent from this country about a year an a half I expect we will have some allowances beside our pay – It was formerly £96 for an outfit and six months pay in advance – Tell Andrew if he could put any books for ne and send to me in London it would be a great comfort to me – I want to study French and Latin any of his old school books would be very acceptable A Ruddimary Rudiminty and latin Grammar and Dictionary, The History of Scotland or any book that can be spared make up a parcel an send it by the Leith Smack to be left at the company office in London till called for, do it immediately as no time can be lost and let me know when it was shipped – do not pay anything at Leith I shall do that – I am certain I shall save the allowance – Excuse this letter I am in a great hurry Remember me to all (ay?) home and believe

I had a kind letter the other day from Mrs M Crae apologising for her not answering mine lormas? In consignment of Mrs Madsign having lost her little girl. She gave me a most kind invitation to a Lynne in Norfolk where she is going with her daughter. I of course cannot accept of it however shall try and see her before I leave the country. I shall write when I know the decision of the Duke

Details of the journey can be read on the profile of Richard Cruise, Captain 84th in command of troops on the store ship Dromedary. It has been suggested, without substance that the journal was actually kept by McCrae, before being handed to Cruise.

McCrae also gave important evidence in R. McNabs Historical Records of New Zealand vol. 1 page 534; as to the interior and natives of New Zealand, the name Moari was not in use at this time

In November 1820 James Dunleavey (see profile) a private in the 84th Foot murdered seaman William Alridge on board the Dromedary. McCrae gave evidence as to the character of Dunleavey

“I have known Dunleavey and considered him a quiet well behaved man. I never saw a disposition to quarrel, on the contrary a very quiet man”

When cross examined he stated “When I went down with Captain Cruise, I saw the accoutrements hanging close by the place where I heard Aldridge was stabbed. There were bayonets there.”

15–21 September 1824 marched with Regiment from Dublin to Waterford

17th March 1829 travelled to join the Service Companies who had been serving in Jamaica since 1827, he stayed until 31st December 1829, when he returned to the U.K.

“I heard in town also that a gentleman Mr. Thompson had lately visited at your house and it was thought was paying his adores to Thomas Ann. I have no doubt he is proper and gentlemanly man but from what I have heard it would be out of the question as he has not the means to support a wife were all other obstacles removed.

His station in society is not what T Ann ought to descend to Purser in the Navy being hardly within the sphere of an officer his pay is a trifle and if not supplied (which I understand he is not) only £50 a year, You see from what I have stated that it ought to be a stop to at once”

He suffered financial anxiety before being appointed to Treasury by Lieutenant-Governor La Trobe in 1845.

Information on early settlers to New Zealand can be found at:-
http://natlib.govt.nz/
https://marsdenarchive.otago.ac.nz/home (On-line digital)